Of all the oddball characters drawn and created by Milt Gross, Iggy is by far my favorite.
In the "Count Screwloose of Tooloose" comic strip (1929-1934), Iggy is the emotionally unstable pooch with a Napoleonic complex who resides at the Nuttycrest Sanitarium along with the other patients, including Count Screwloose.   Iggy is hopelessly devoted to the Count, who is constantly escaping from the asylum, leaving Iggy behind in a state of utter distress and nonstop weeping at the thought of being away from the Count for even a moment.  Outside the walls of Nuttycrest, the Count invariably finds the real world to be much crazier than the nuthatch, and in the final panel of each Sunday strip, we find the Count racing back to Nuttycrest, where Iggy reacts with tears of joy at the return of his beloved pal.   Every time the Count jumps back into the compound, he calls out:  "Iggy, keep an eye on me!" 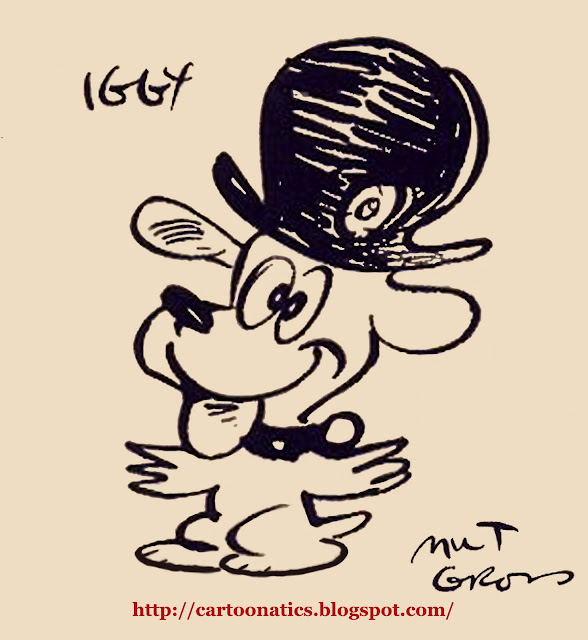 
At some point during the course of the strip -- and by the time Gross arrived at MGM to make a couple of Count Screwloose cartoons --  he had replaced Iggy with a different cartoon pooch named J.R., who didn't have a hundredth of the demented personality of Iggy.


There have been many great cartoon dogs in the history of  comics, and while Iggy may not be one of the most famous of the group, he is truly one of the funniest and most emotive, quirky and unique canine creations in the realm of comics and cartoons.
Posted by Tom Ruegger at 3:20 PM