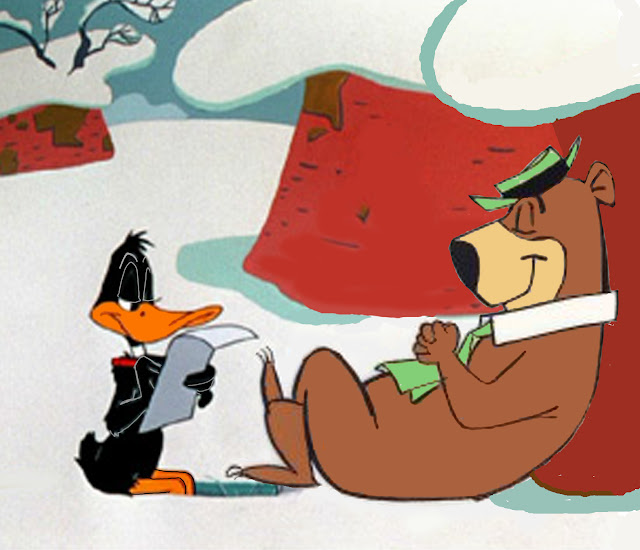 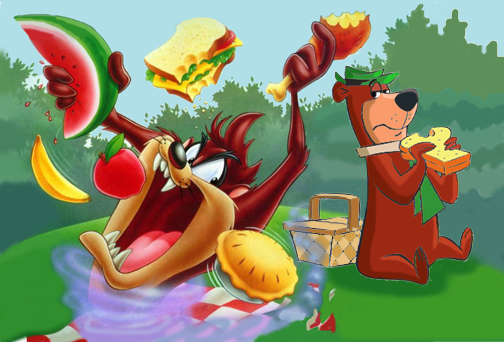 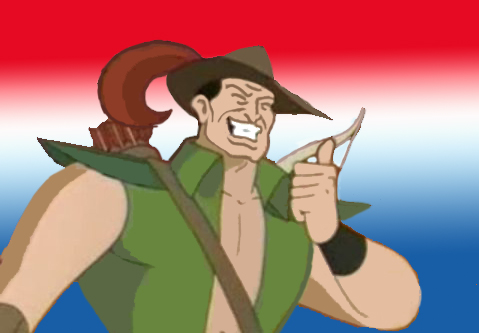 More  proposed segments for "Mixed Nutz" (2008) -- the animated show I pitched to Warners Bros. that matched up characters from Looney Tunes with stars from the Hanna-Barbera universe. 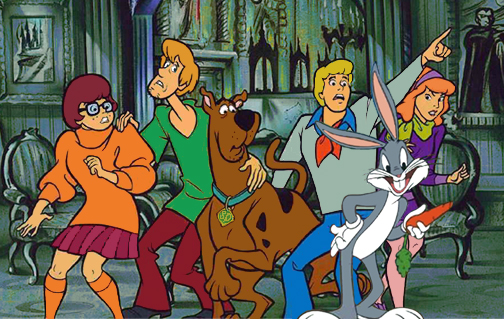 Bugs Bunny upstages and confuses the daylights out of Scooby and the gang during a spooky mystery that takes place inside the Motion Picture Hospital and Animators' Retirement Home in Calabasas. 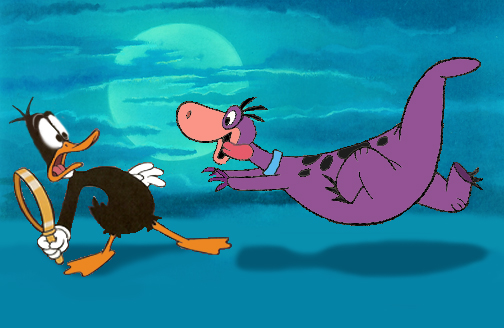 After Daffy replaces an injured Shaggy in the Scooby Doo series, Scooby quits in protest, and is replaced by Dino, much to Daffy's consternation.

Another image from "Mixed Nuts," the animated series I pitched to Warner Bros. that combined the worlds of Looney Tunes and Hanna-Barbera characters.

Another image from "Mixed Nutz," the animated TV series concept that teamed up Looney Tunes characters with Hanna-Barbera characters in all new cartoons.

Taz meets his match in the form of a loquacious little duck -- Yakky Doodle -- in this segment from "Mixed Nutz," the animated series I pitched to Warner Bros. that combined the Looney Tunes characters with Hanna-Barbera's cartoon stars. 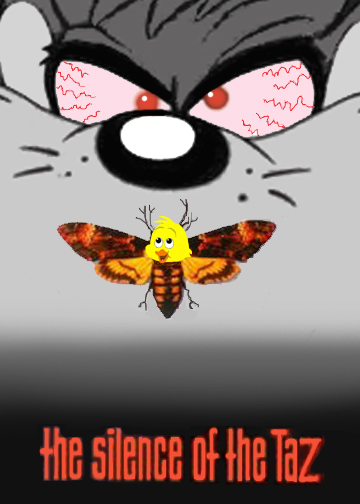 Another image from "Mixed Nutz," an animated TV series I pitched to Warner Bros. back in 2008.  In "Mixed Nutz," Looney Tunes characters team up with Hanna-Barbera stars. 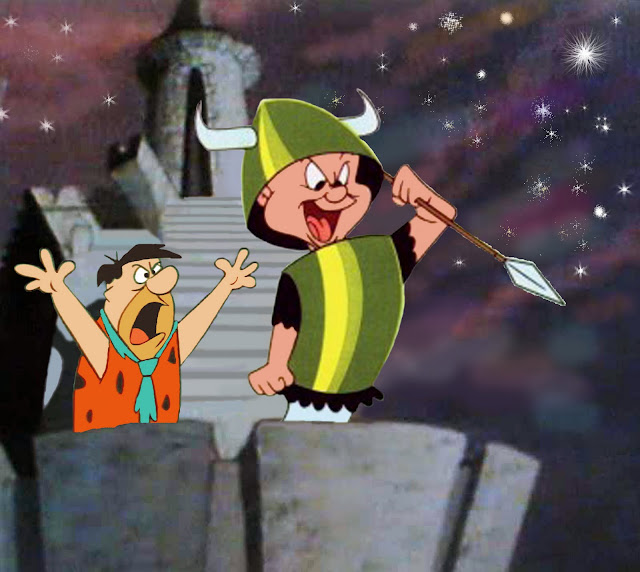 Viking Elmer Fudd arrives in Bedrock to conquer this stone-aged civilization.  But it's Elmer's incessant singing that drives Fred and the rest of the Flintstones out of their minds. 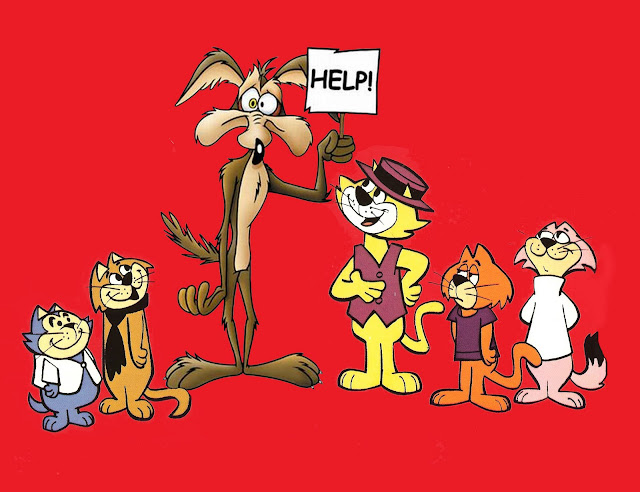 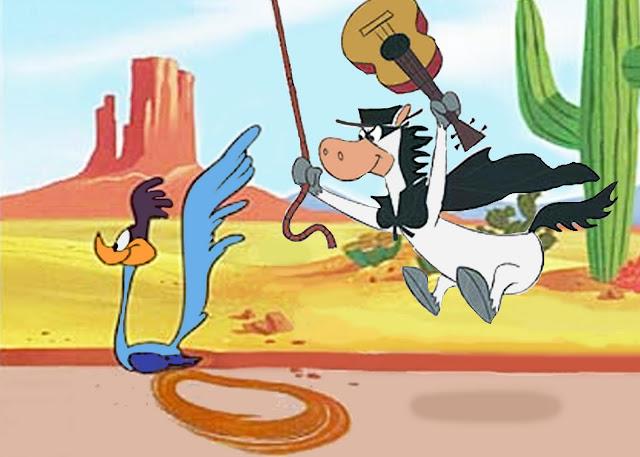 Back in 2008, I proposed an animated TV series to the powers-that-be at Warner Bros.

The basic concept of the show:  cartoon universes collide, resulting in Looney Tunes characters and Hanna-Barbera characters appearing in cartoons with each other.

I called the show "Mixed Nutz" and pitched it to Brad Globe, head of Warner Bros. global licensing.   Brad loved the concept and my pitch.  In fact, at my first meeting with him, three minutes into the pitch, after he had seen a few pieces of the art, he looked at me and, with a huge smile, said:  "We're making this show.  I've been waiting for someone to walk in with a concept like this for at least three years.  And now you've done it.  We're going to make this show."

I was on cloud nine.

A week or so later, there was a follow-up pitch with Brad, Warner Bros. Television Animation President Peter Roth, and the President of the Warner Bros. Television Group Bruce Rosenblum, and once again, "Mixed Nutz" received a very enthusiastic response, so much so that in the room that day, the three execs committed to making a pilot for the series.  Hand shakes all around.

Over the next couple of weeks, I continued developing segments and story ideas for the show, I kept drawing and pulling artwork together, and I started to make calls in hopes of lining up some of the brilliant folks who helped make "Animaniacs" a success, funny people like Sherri Stoner, Deanna Oliver, Paul Rugg, John McCann, Alfred Gimeno, John McClenahan, Joey Banaskiewicz and others.

Then, about a month after the initial pitch,  Sam Register was hired by Warner Bros. to be the executive in charge of Warner Bros. Television Animation, where he would be reporting directly to division prez Peter Roth.  Sam had his own plans for the Looney Tunes characters.  Soon after he arrived on the scene, my green-lit pilot became un-green-lit.

"Mixed Nutz" was canceled before it could even get started.

And I never heard another word from anyone at Warner Bros.

Anyway, this post, and the subsequent posts about "Mixed Nutz," can be filed under the category "The Cartoon Shows that Never Were #2."