Yogi was a regular "go-to" character for Hanna-Barbera, and the "smarter than average bear" was never far from Joe Barbera's thoughts.  Joe really felt a close kinship with this fast-talking and quick-witted star, and Joe was always developing new stories to put Yogi through his paces.


Along with artists/colleagues including John Ludin, Earl Kress, Scott Jeralds, Alfred Gimeno, Wayne Kaatz,  Charlie Howell and plenty of others, I worked with Yogi and many of the classic Hanna-Barbera characters on the syndicated series "Yogi's Treasure Hunt," which was a regular segment of the two-hour weekend cartoon block entitled "The Funtastic World of Hanna-Barbera." 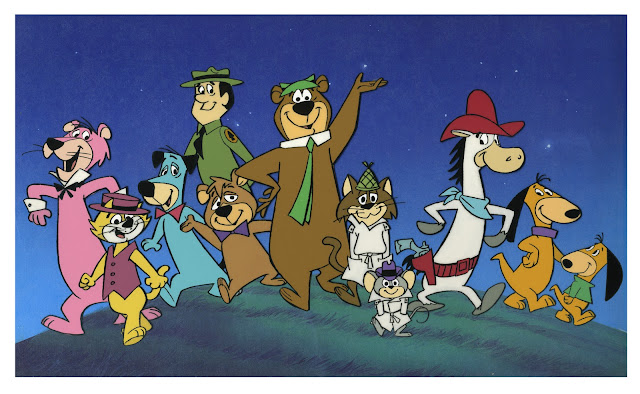 Above is a cel set-up with Yogi and his costars from "Yogi's Treasure Hunt."   (It was fun to have Snooper &amp; Blabber and Augie Doggie &amp; Doggie Daddy back in the mix!)