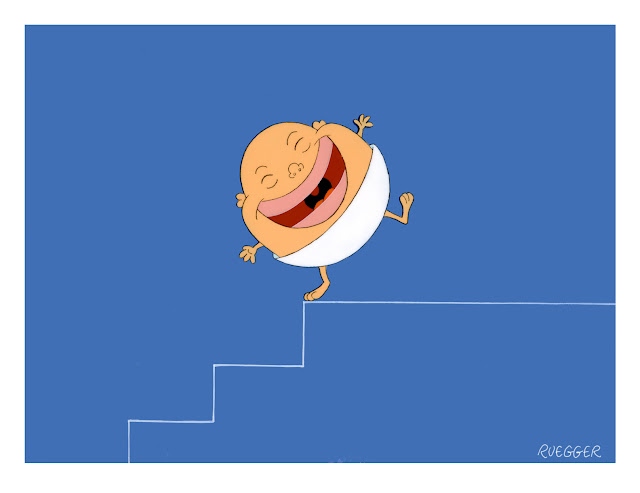 Have A Holly Jolly Christmas! 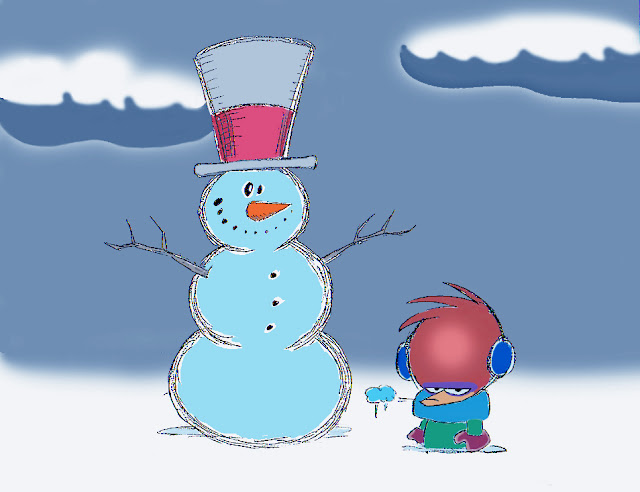 "The Stockings Were Hung By The Chimney With Care..." 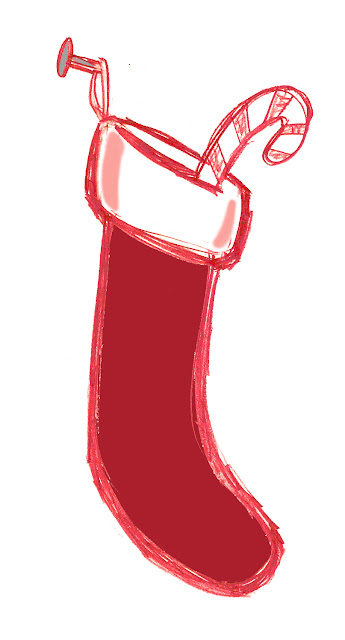 "While Visions of Sugar-Plums Danced in Their Heads" 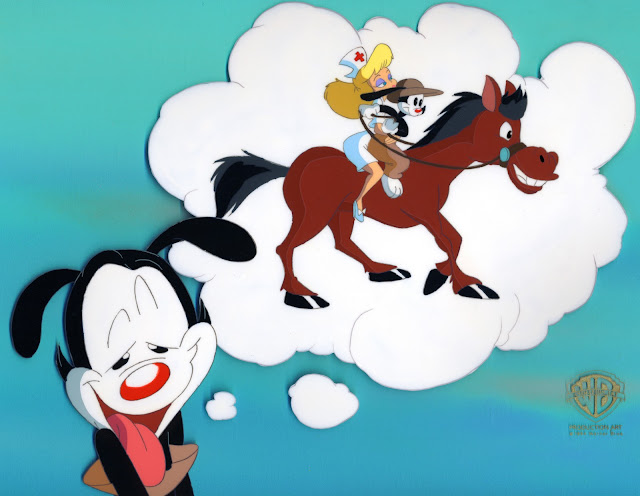 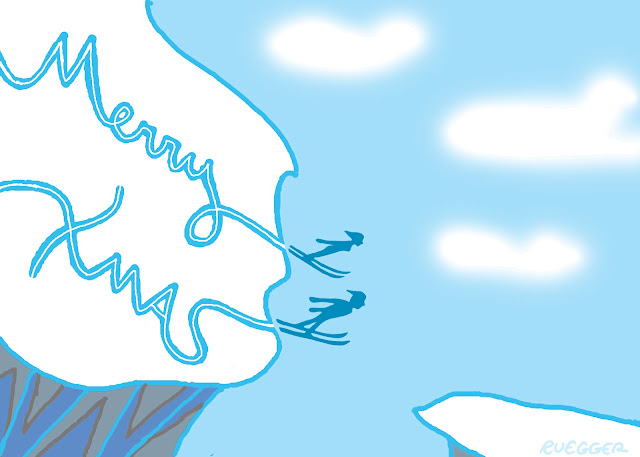 Have a great holiday season! 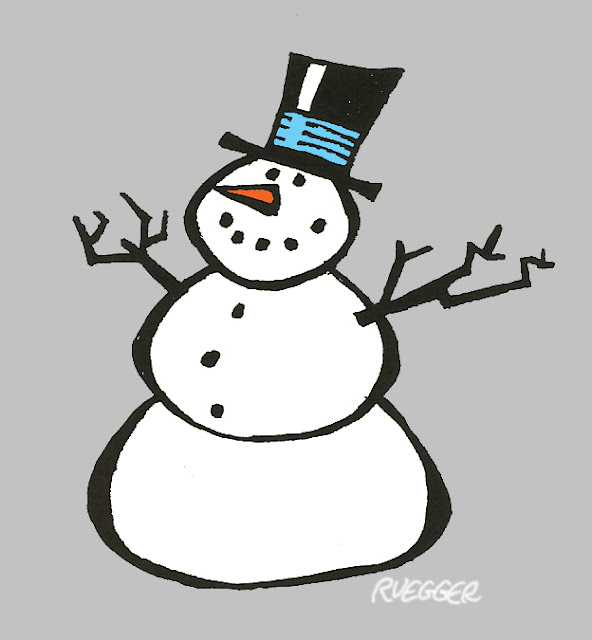 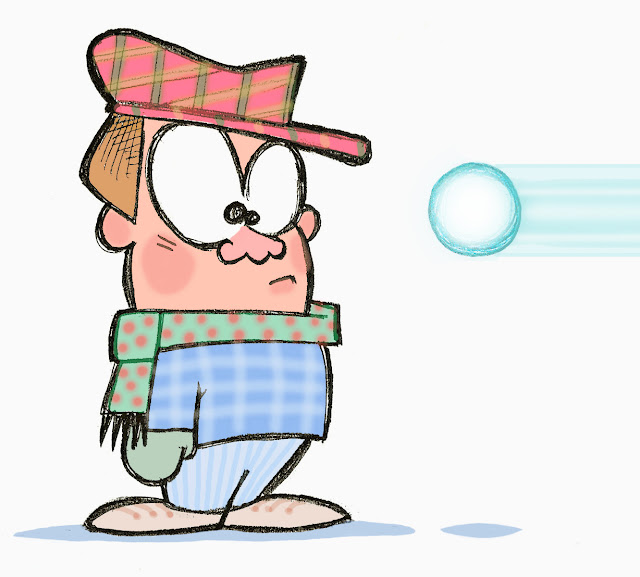 'Twas the Night Before Christmas and All Through the House...

...Some creatures were stirring, including a mouse... 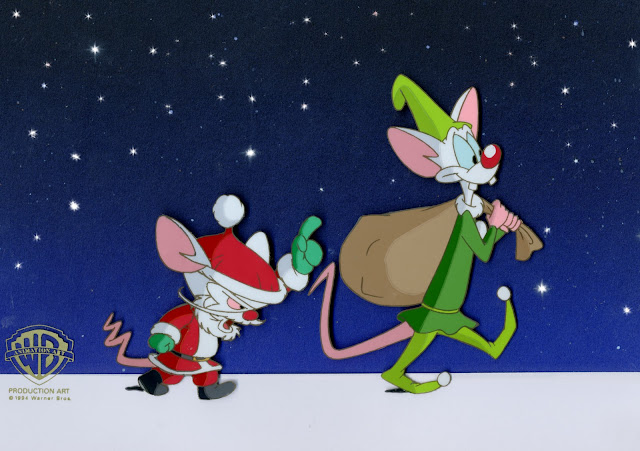 "Tonight, my dear Pinky, our plan is unfurled
We'll steal Santa's sleigh and take over the world!"

From Animaniacs:  "'Twas the Day Before Christmas."
Posted by Tom Ruegger at 10:32 AM No comments:

"A Pinky and the Brain Christmas" -- Pinky's Letter to Santa

A Pinky and the Brain Christmas (1995)
directed by Rusty Mills

"Merry Christmas from Pinky and the Brain" 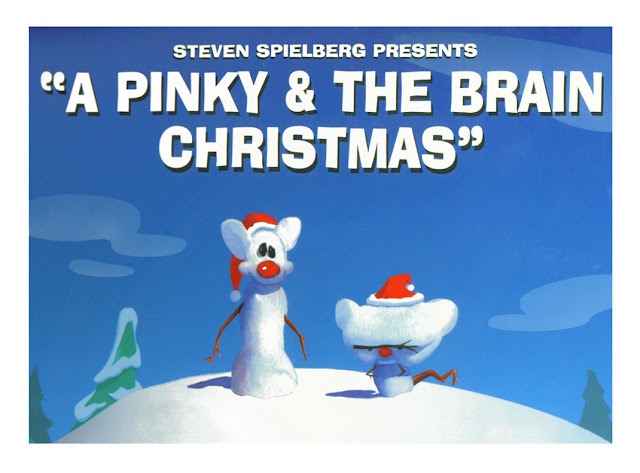 One of my favorite shorts of the series, "Little Drummer Warners" casts Yakko, Wakko and Dot as shepherds "abiding in the field at night" in this rendition of the Christmas story that offers up a jazzy swing version of "Little Drummer Boy."  Many thanks to Richard Stone, Steve Bernstein and Julie Bernstein for making the music work so well.  This cartoon was beautifully directed by Lenord Robinson.  Earl Kress and I worked on the script, and the vocal performances by Rob Paulsen, Jess Harnell, Tress MacNeille and Jim Cummings, among others, are outstanding. 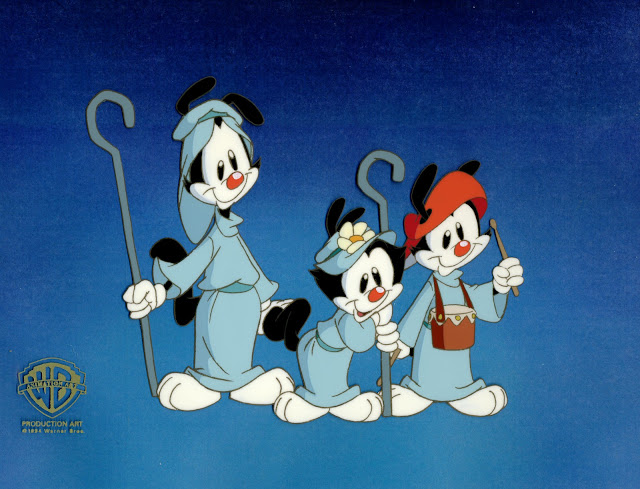 This was the 1992 Christmas card sent out by Warner Bros. Animation.  "Batman:  the Animated Series" had premiered just a few months earlier.  This beautiful and funny holiday scene was created by Bruce Timm.   I had a few copies matted then sought out the autographs of some of the directors, writers and producers on the series. 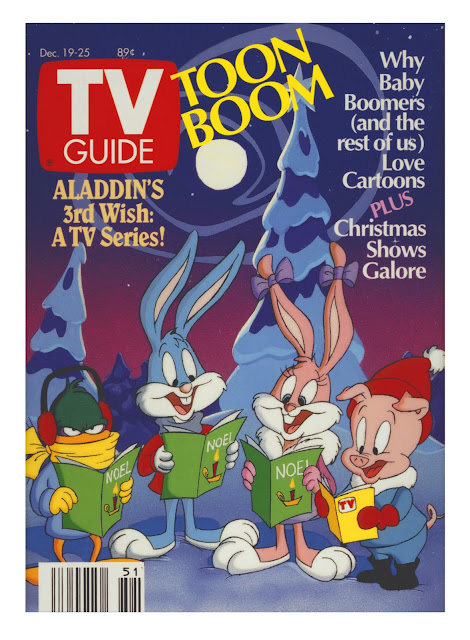 Here's the original painted background and cel setup...preserved for posterity by Jean MacCurdy, who gave it to me as a Christmas gift back in '92.  Thanks Jean! 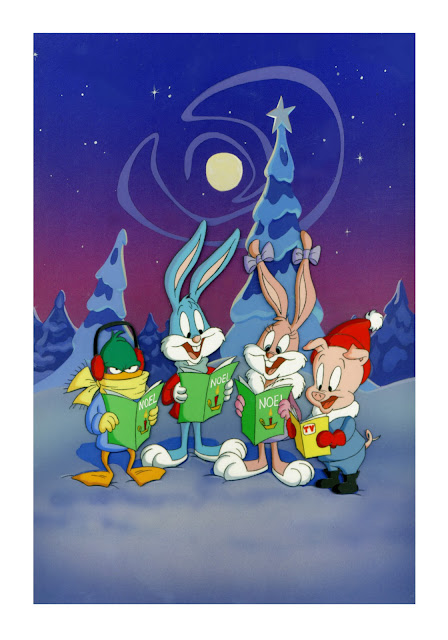 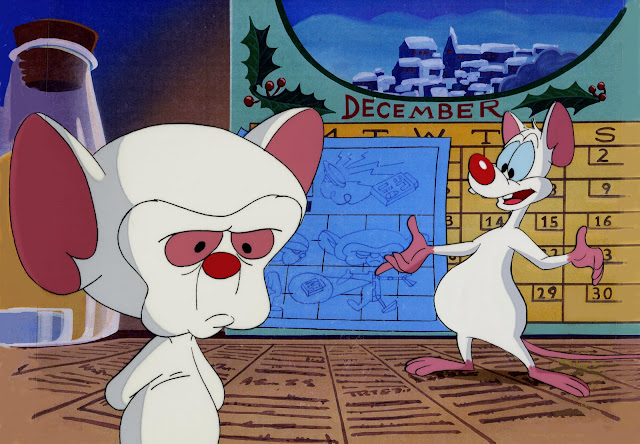 Here's another early draft of a movie poster for a proposed Animaniacs feature film:  "Revolutionary Warners."  While we plotted out an outline in which the Warners played an instrumental role in the battle for independence, Bob Doucette designed this patriotic promo piece. 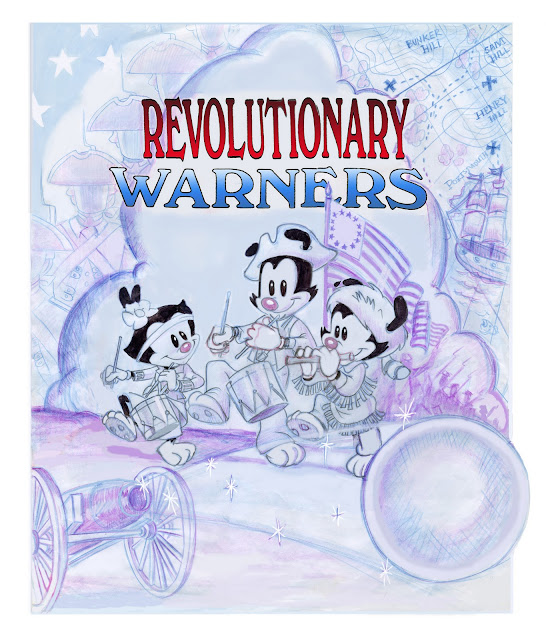 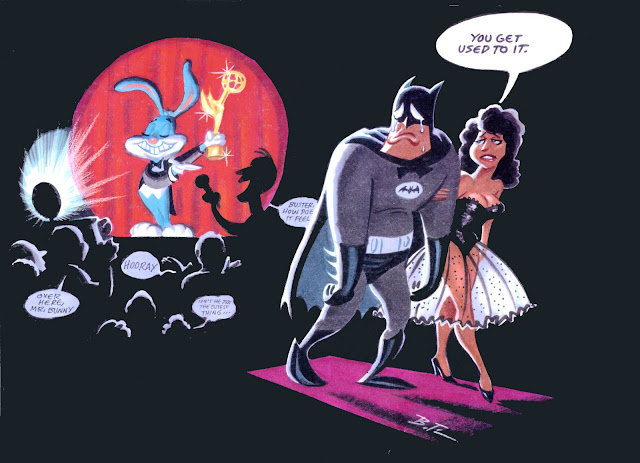 At Warner Bros. Animation ( and most other studios)  many artists would celebrate birthdays, holidays, major events, studio politics and other humorous moments of life by drawing up cartoons and caricatures of fellow workers.  Batman producer/director/designer Bruce Timm was and is one of the very best at these works of comic art, and his caricatures have always been brilliant.  His cartoons of Eddie Fitszgerald and Tom Minton were used as the initial rough facial models for Pinky and the Brain.  (We just added ears, white furry bodies and pink tails to Bruce's drawings of Eddie and Tom.)
Posted by Tom Ruegger at 5:52 PM 2 comments:

Here's another preliminary poster for a proposed Animaniacs feature film.  I love the Hirschfeld-like caricatures Bob Doucette drew into the margins.  Many of the elements of this story found their way into the Animaniacs two-parter, "Hooray for North Hollywood." 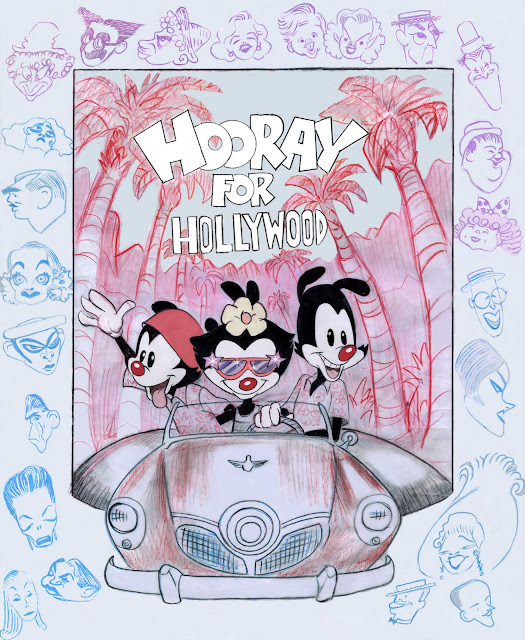 Another early draft of a poster, drawn by Bob Doucette, for a proposed Animaniacs feature film.  This was Yakko, Wakko and Dot's take on "Oliver Twist."  Bob's designs are fabulous.  I love seeing the pencilwork on all of these efforts.
This particular poster took a bit more time to restore than the others.  I found it folded up at the bottom of an apparently non-leakproof box. 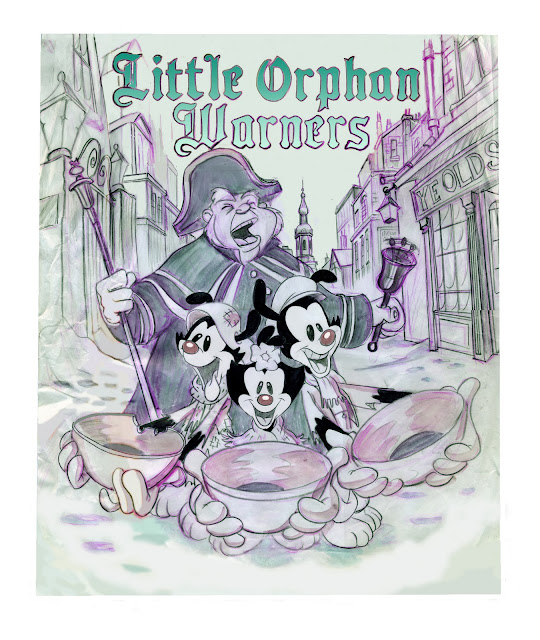 Another preliminary movie poster designed by Bob Doucette for a series of  "Animaniacs" movie concepts that were developed in the late 90's.  Paul Rugg had his hand in the development of this scenario, and the treatment is hilarious.  Yakko, Wakko and Dot play troubadours sent on a mission by the King to track down his heir, the princess, in order to save the kingdom.  In "Wandering Warners We," the fourth Warner sibling is introduced:  the profoundly untalented "Lakko."  (Before the midpoint of the movie, Lakko is unceremoniously fired from the production by his brothers and sister due to an abject lack of timing and charisma.) 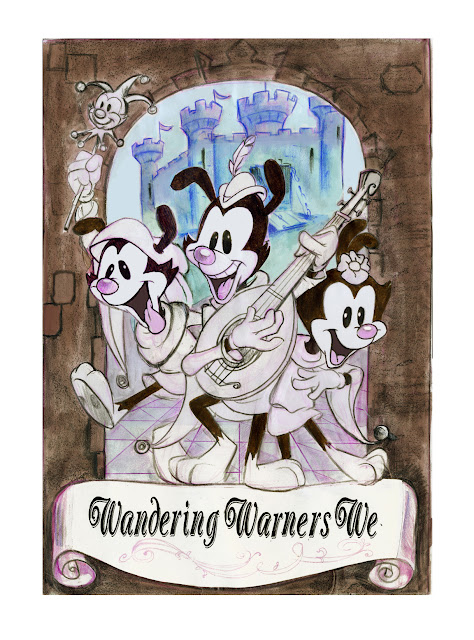 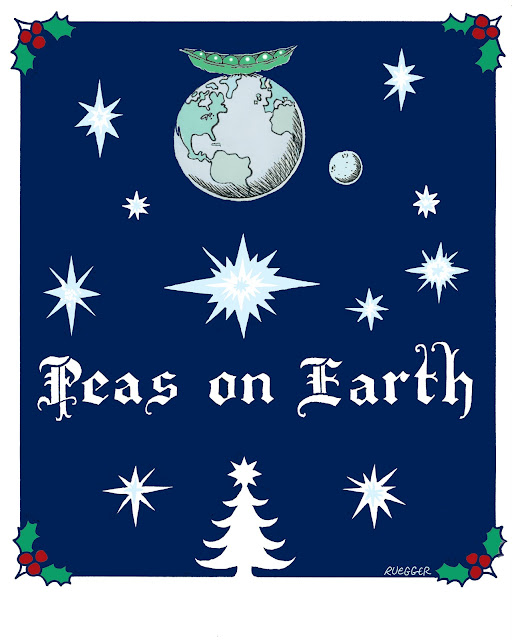 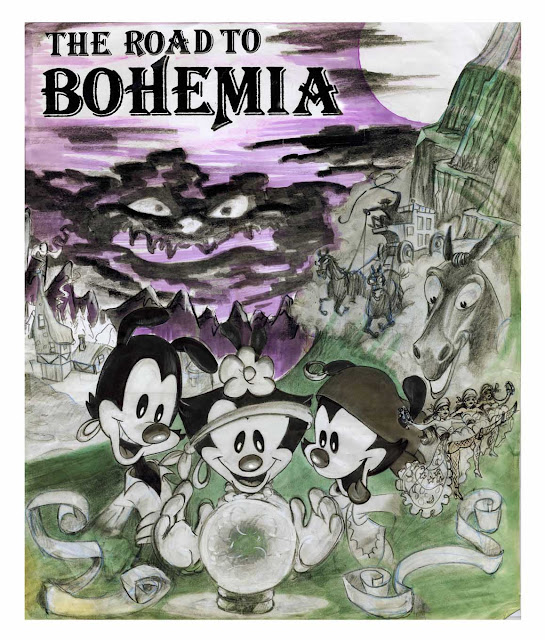 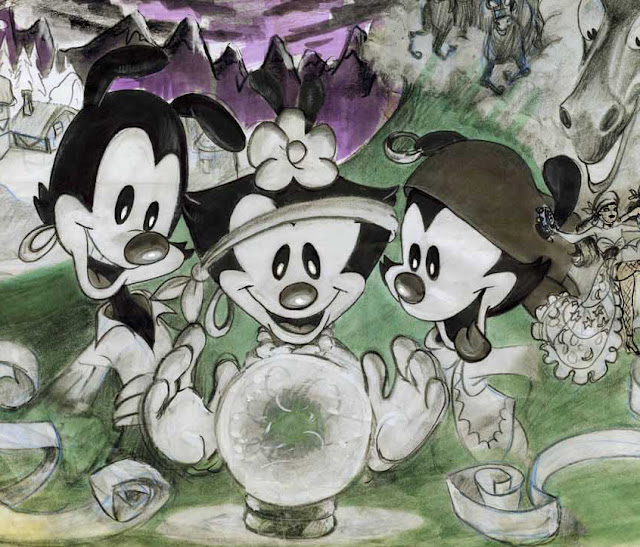