The Cartoon Shows That Never Were #1: "The Trio of Triumph" 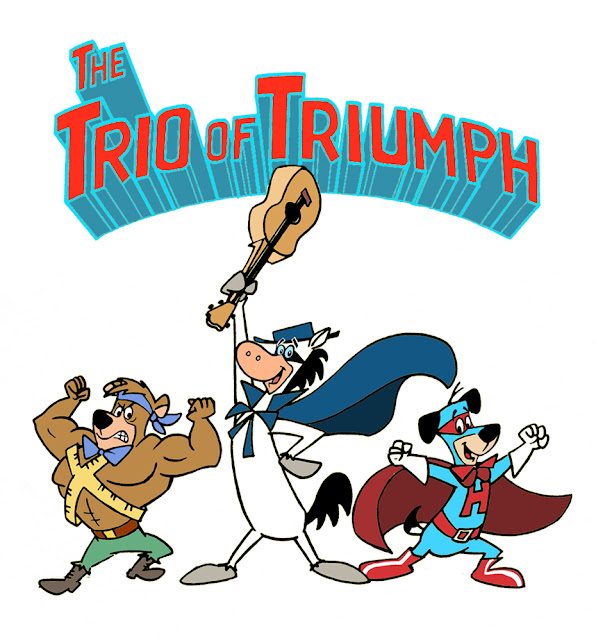 Back around 1986, I had been working on "Yogi's Treasure Hunt" with, among others, two of the legends of cartoon voice overs, and certainly two of the voice actors who helped make Hanna-Barbera Productions the success that it was:  namely, Daws Butler and Don Messick.

Both Daws and Don were famously talented as well as renown for being among the nicest people working in show business.  On occasion, before or after a "Treasure Hunt" recording session, Daws would stop by the office and give us writers, including John Ludin, Earl Kress and me, a few pointers on how one of his HB characters turns a phrase.  By this time, Daws had been performing these roles for over 25 years, so you can bet he knew his stuff.   He was particularly helpful in getting us in tune with Quick Draw's cadence and word pronunciation.  Since Quick Draw was one of my favorite characters, I was always grateful for these entertaining tips and lessons from the master.

...When we heard that "Yogi's Treasure Hunt" would be drawing to a close, John and Earl and Scott Jeralds, Alfred Gimeno and I started thinking about some new show concepts for the classic Hanna-Barbera characters.  We loved these characters and the people who voiced them, and wanted to keep that association going.  We came up with a number of show ideas.

One that made it through several development stages and was ultimately pitched to the networks was "The Trio of Triumph," which cast Quick Draw, Huck and Boo Boo as modern day superheroes.  Quick Draw played El Kabong, now in the city, in a Batman-ish role.  Huck played Huckle-Hero, a flying canine persona we had introduced in "Yogi's Treasure Hunt."  And Boo Boo became Ram-Boo-Boo, our cross between the Hulk and John Rambo.

What remains is a show bible and pitch document for the series that I will post if there proves to be keen interest.

But, for the time being, here, above, is the cover art from the pitch.
Posted by Tom Ruegger at 6:01 PM